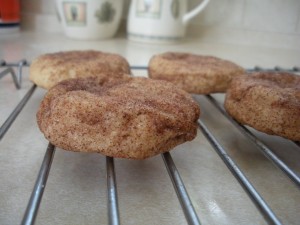 This past weekend, I hopped a train and chugged down the Northeast Corridor to the City of Brotherly Love–Philadelphia, home of such illustrious denizens as the Liberty Bell and the cheesesteak. I was invited to a party given by a friend of mine who’d just graduated from college the week before, and as I welcome any excuse to return to Philly, I was more than happy to attend.
Now, I’m one of those people who doesn’t go to any sort of function without bringing food. I’m sure you know them. Many of you probably are them. My choice for this party? The classic, dependable, yet never-boring snickerdoodle.

Allow me to explain. My friend, the party’s honoree, is a Classic Baked Good Man. That is, he’d be happier with a no-frills, baked-to-perfection chocolate chip cookie than with any sort of bar/sandwich/cake-pie-brownie concoction I could dream up, no matter how daring or creative the recipe. He just knows what he likes. So I knew I couldn’t stay far from the tried-and-true.

But, being me, I still wanted to try something new–especially so I could write about it! Believe it or not, I’d never actually baked a snickerdoodle before this past weekend. Granted, I’ve eaten more than my fair share of them, but these cookies contain one ingredient that has always–irrationally or no–frightened me: cream of tartar.

I don’t understand it. “Cream of tartar”? What kind of name is that for an ingredient? To be honest, it immediately makes me think of tartar sauce, which I don’t like anyway. And I didn’t actually know what it was supposed to do. Couldn’t I just substitute some other, friendlier ingredient? Absolutely not, according to all of the blogs I read while doing research. The cream of tartar, it turns out, is one of those leavening ingredients (along the lines of baking powder and baking soda) that given snickerdoodles their unique, almost cake-y texture inside. And I wasn’t prepared to sacrifice that! So to the grocery store it was to track down the innocuous-looking little jar. As it turns out, though, it was well worth it…

The recipe and instructions that follow are adapted from this recipe at Smitten Kitchen (which she in turn adapted from Martha Stewart). Her recipe called for 1 1/2 cups of granulated white sugar in the cookie batter. I really like the darker, molasses-y taste that brown sugar gives to cookies, and I’d also seen a couple of other recipes that played with using it in snickerdoodles, so I decided to give it a try–thus my quantites on the ingredients list below. I’m certain these would be fabulous with just white sugar as well.

I also added a splash of vanilla as I was beating in the eggs. I had a roommate in undergrad who once told me that her secret for any cookies was to add vanilla, and frankly, I don’t blame her. I love it as an aromatic, and cookies that leave a trace of vanilla, especially cookies as sugary as these, can’t be beat.

For the cinnamon sugar coating:
1. Preheat oven to 400 degrees F.
2. Sift together flour, cream of tartar, baking soda, and salt in one bowl. Set aside.
3. In another bowl, combine butter and both sugars (or just your granulated sugar if you’re not using the brown). Beat until light and fluffy, scraping down the sides of the bowl.
4. Add eggs and beat to combine. At this point, add the vanilla if you’re subscribing to my philosophy.
5. Add dry ingredients, about 1/3 at a time, and beat to combine.
6. Here the recipe recommended that I chill the dough for an hour before scooping, which I did. However, having worked with the refrigerated dough and the slightly thawed dough two batches later, I actually preferred the stickier dough–it made it much easier to roll in the cinnamon sugar mixture (see below).
7. In a small bowl, combine 1/4 cup granulated white sugar and the cinnamon. Form small balls of dough (mine were about 2 inches in diameter for a cookie on the smaller side) and roll in cinnamon sugar mixture.
8. Place about 2 inches apart on baking sheets. Now, the original recipe called for these cookies to be baked for 10 minutes, but mine were completely done after 8. I wound up baking the second and third batches for only 6 minutes, because I made the dough balls smaller (party cookies–quantity matters!) and prefer my cookies more on the underdone side to overdone. If you want larger cookies (Smitten Kitchen’s were 3-4 inches across), play with upping the bake time.
9. Transfer sheets to a wire rack to cool for about 5 minutes before removing the cookies.

Using a smaller dough ball size, this recipe will make about 3 dozen cookies. 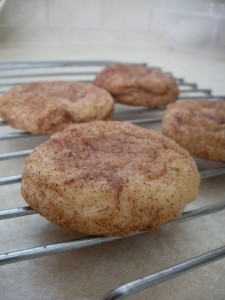 These snickerdoodles were an overwhelming success, which I attribute in large part to the fact that the graduate has a ton of cousins under the age of seven. Those little kids were running around double-fisting sugar-coated cookies all night (to their parents’ delight, I’m sure). Both plates were wiped clean by the end of the party–not a leftover in sight. (I should also say that I saw my former thesis adviser, who was a party guest as well, pocket several snickerdoodles when he thought no one was looking. He is one of my favorite professors ever for a reason.) A reliable source (okay, well, my boyfriend) proclaimed, “They taste like little pillows of heaven!” And it’s true–they had that crunchy sugar-coated outside / dense but airy cake-y inside thing going for them that makes cookies oh so addictive. Especially when they’re bite-sized! That means you can have more, right? …Right?

Oh, psh, who asked you anyway?