Once upon a time, there was a girl named Tara. (I promise, this story isn’t autobiographical.) She was the first one in her family to go away to college, and she’d chosen to dorm. She was also getting randomly matched with a roommate. Cue scary music.

Fast forward. Have I mentioned how fantastically awesome and wonderful my college roommate is? Seriously. As in, provides me with this recipe for cake in a mug and convinces me to be spontaneous and fun-loving and all that jazz I’m usually not. Have I mentioned she’s also going to be a doctor? And that she just got back from spending five weeks traveling from village to village in the Himalayas providing medical care to people there who really, really need it?

Yeah, she’s way more epic than I am.

Anyway. Needless to say, I would be happy to act as the poster girl for the “Getting randomly matched with a roommate can work out fabulously” society. After not having seen my dear roomie since my birthday way back in May, we decided to meet up in NYC one evening after I got out of work. Roomie dearest (hereafter, D) also had a plan to bestow upon me my belated birthday gift:

A trip to sugar Sweet sunshine to sample an array of their cupcakes, plus documentation with her (freaking amazing) DSLR camera (of which I am incredibly unspeakably jealous). Hooray!

Can we talk about how adorable this place is?

We decided we were gonna go big or go home. So we got six cupcakes, cut ’em all in half…and tried all of them. Yes, I did take notes. 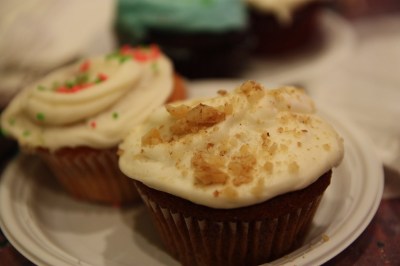 The word D and I both used to describe the Strawberry was “subtle”–it was a cupcake that was understated in its deliciousness. I was pleasantly surprised to find bits of strawberry fruit in the cake itself, which made for a really great texture. The cream cheese gave the cupcake a yummy tang–I’m glad I opted for the strawberry/cream cheese combo rather than the strawberry/peanut butter option they also offered. For some reason, strawberry and peanut butter just sounded weird to me!

The Pumpkin was spicy perfection, probably my second favorite of the whole tasting shebang. It tasted kind of like Thanksgiving in a cupcake–all of the goodness of those cinnamonny, nutmeggy spices you get when you make pumpkin bread or other holiday baked goods. And of course, the more cream cheese icing involved, the better.

Next, the Pistachio (pistachio cake with “the Moose,” which is sugar Sweet sunshine’s special satin buttercream) and the Bob (yellow cake with chocolate almond buttercream).

The Pistachio actually wasn’t as packed with flavor as I had expected it to be. The cake was green when we cut into the cake, which surprised the two of us and had us prepared for some sort of strong pistachio flavor, but it didn’t really follow through with that taste-wise. We weren’t huge fans of “the Moose” either–it was light and whippy, but kind of insubstantial and not sweet at all. D’s analysis: “This is all buttah.” Mine? Kind of meh. Not finger-lickin’ icing. And we all know that’s how I prefer mine to be.

Now, the Bob? Don’t even get me started. Oh my gosh. Even at the end of the tasting, when D and I were both ready to explode and were just craving salty things to balance out the extreme sugar overload in our systems, I probably could have eaten another dozen of these. If you can’t tell, this was my favorite of the bunch. The chocolate almond buttercream was a total knockout–the almond flavor definitely came through, and it gave the traditional buttercream a really fun quirk. One of the first mixed drinks I got a taste for was an amaretto sour (I know, I know, the girliest drink possible), and this cupcake was like eating one of those–I think I much prefer the baked good version to the alcohol one, if we’re being honest! 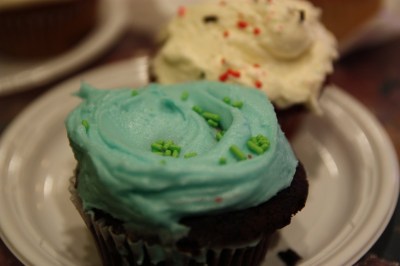 The B&W was a keeper in my book because the buttercream made a reappearance, this time in a vanilla version rather than the chocolate almond. It was also a nice change to have some chocolate cake after having so many vanilla variants!

After the fact, though, D and I both wished we’d gotten the Sassy Red Velvet rather than the Sexy. The Sexy Red Velvet was topped with “the Moose,” which, as we’d discovered, we weren’t the biggest fans of. But its Sassy sister was iced with my beloved chocolate almond buttercream! Curses! I guess I’ll just have to go back and get another. And maybe the Ooey Gooey (chocolate cake with chocolate almond buttercream), too. You know, for statistical purposes. Or something. Another thing we noticed, both with the B&W and the Red Velvet, was that the cake was a bit drier and crumbly, not quite as moist as with the first four (oof)–I’m not sure whether to attribute it to the cupcakes sitting on the table outside of the refrigerator cases the longest, or perhaps it being later in the day, or another x-factor that hasn’t come to mind. 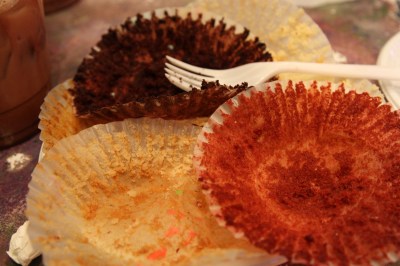 Cupcakes, get in mah belleh.

I should add that sugar Sweet sunshine sells a veritable cornucopia of delicious sweet items. Before D and I started the Great Cupcake Tasting, we told ourselves we’d have room for their Chocolate Bomb pudding after the fact (or maybe we’d take some to go). I cannot even communicate to you how wrong we were. Sadly, we did not get to sample their cookies, brownies, or assortment of cakes (of the layered and non-layered varieties), but…simply incentive for a return journey.

Moral of the story? Go downtown. Way downtown. Where the streets don’t have numbers anymore. Getcha self some cupcakes. Tell yourself you can never eat again.

Then go have matzo ball soup at Katz’s Deli for (real) dinner.

As I mentioned earlier, all of the photos in this post were taken by my roommate, who, in addition to being on the road to her MD, is also an amateur photographer and part-time blogger! You can see more of her photos on her blog here!

11 thoughts on “A Roomie Reunion–Sugary Sweet!”