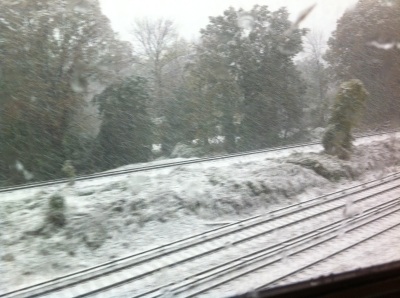 First things first: I guess that October decided to dress up as December for Halloween this year, huh?

For serious. Not cool. I’m still having nightmares about commuting in last year’s epic snowstorms and I’m completely not ready to start dealing with all that mess again. Fall, come back for awhile, k?

Part of me almost wishes this freaky snowstorm had happened on Sunday so that this generation of little kids would look back someday and have one year of Halloween pictures taken with a snowy backdrop. Don’t you all remember those Halloweens where it was so cold that you had to wear a long-sleeved turtleneck under your costume? Or worse, horror of horrors, your down coat. No matter how much you protested that Wedding Princess Jasmine did NOT have a white turtleneck with pumpkins on it under her bridal gown, or that Cinderella absolutely did not wear a parka when she headed out in her coach. Those excuses did not fly with Mom, authentic photographs be damned. (Not that I’m still bitter or anything.)

Anyway, down to business. I have been watching the pumpkin-centric recipes pile up this fall, dreaming of the scent of cinnamon and nutmeg and other such autumnal spices permeating my kitchen. But October turned out to be such a hectic month (and that giant Costco-sized can of pumpkin in my cabinet was more than a little intimidating) that I kept putting off breaking out the great gourd in my own lil kitchen. This past week, I finally caved! 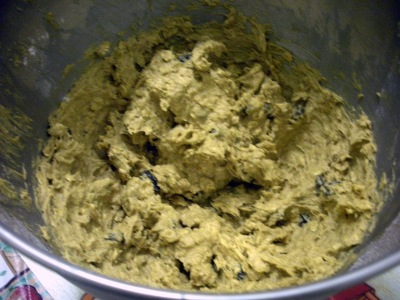 These pumpkin oatmeal raisin cookies were moist, flavorful, and super soft. They got rave reviews from my yoga class (the designated recipients–I had promised them a post-class treat), coworkers, and even my mom, who asked me to save her a couple for when I was visiting this weekend. They are definitely a cake-y cookie–from the reading I’ve been doing, it’s hard to get a crispy pumpkin cookie. But that’s A-OK with me, since I prefer a soft, chewy cookie anyways. If you’re in it for the crunch, though, I make no promises. 🙂

Since I’d never done a pumpkin dessert before, I didn’t want to go too heavy-handed at first, especially because my family typically balks at anything orange. The pumpkin in these cookies is very subtle, since the flavor of the raisins lends a bright taste as well (official assessment from Charlie, my always-articulate taste tester). It’s definitely there, though, as is the spicy undertone from the cinnamon. And the color of the cookies even tends toward the orange, making these a fun addition to any fall table. I hope you enjoy! 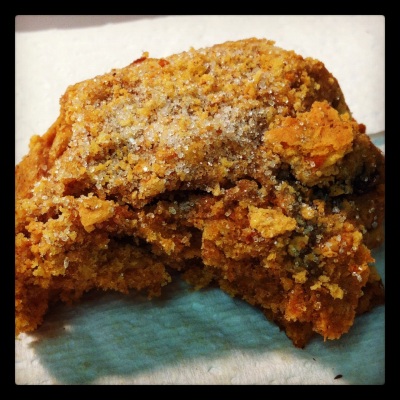 *Taylor’s original recipe also added nutmeg, cloves, and ginger–all of your traditional fall spices. I, however, am a poor city-dwelling 20-something. Those spices are expensive, man! I just went extra generous on the cinnamon. If you have more cash at your disposal than I do, feel free to add pinches of those wonderful spices to your batter.
**I realize it’s seemingly impossible to add “half” an egg. Since I was scaling this recipe down, though, I didn’t want to mess with the binding agents and have them out of proportion. So what I did was this: break your egg in a mug, then mix it up with a fork. Pour half of your beaten egg into the batter and combine as normal. Probably would get me expelled from Le Cordon Bleu, but…whatevs. 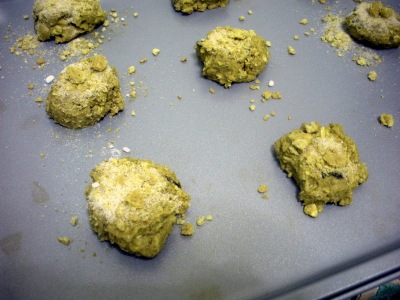 1. Cream butter, sugars, and honey together in the bowl of an electric mixer until smooth and fluffy, between 2 and 3 minutes.
2. Add pumpkin, egg, and vanilla, and mix until well incorporated. The batter will still look a little funky (read: gritty) because of the pumpkin puree, but never fear–all will be well when the dry ingredients are added.
3. In a medium bowl, whisk together flour, oats, baking powder, baking soda, salt, and cinnamon.
4. Gradually add the dry ingredients to the wet ingredient mixture until just combined.
5. Fold in the raisins.
6. Refrigerate dough for 30 minutes.
7. While the dough is chilling, preheat the oven to 350 degrees F.
8. In a small bowl, mix crushed graham crackers, granulated sugar, and cinnamon until combined.
9. Form balls of cookie dough (mine were about 2 inches across) and press the tops into the bowl of graham/cinnamon/sugar.
10. Drop dough balls onto prepared baking sheet (mine is nonstick, but you could line with parchment paper if you like).
11. Bake for 11-12 minutes, or until the edges are just starting to brown. (Because the cookies are so moist, the bigger your cookie, the longer it will take to bake–some of my bigger cookies needed closer to 13 minutes to be fully done.) While cookies are baking, walk from room to room in your apartment inhaling the a-freaking-mazing scent that will permeate everything. Perhaps call your sister/mother/boyfriend and brag about how good your apartment smells. It’s totally fine.
12. Cool on baking sheet for 5 minutes, then transfer to wire racks to cool completely.

Makes about 2 dozen cookies. These cookies also will keep wonderfully in an airtight container (I am the queen of Tupperware) because they’re so moist to begin with. 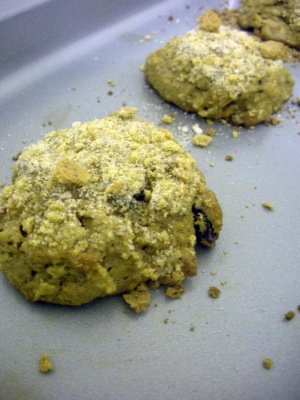