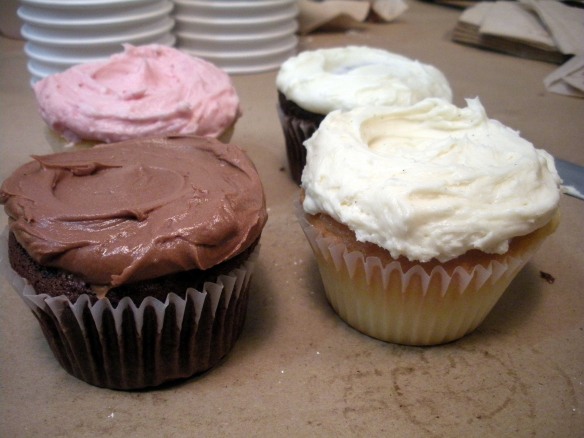 This year I started buying Christmas presents in October. Well, one present. I knew without a doubt when I saw this Groupon offer that it was the perfect gift for my sister (the Middle Chip!)–a cupcake class for the two of us at Butter Lane! Mixing, frosting, sampling…seriously, could you ask for a better present?!

Our excitement was running high from the moment we walked in the door: 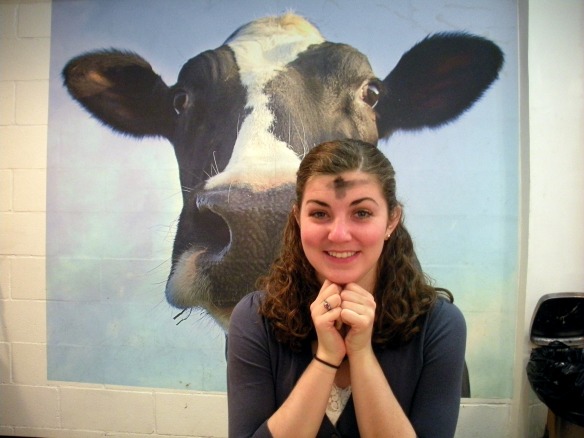 (Oh, by the way, it was Ash Wednesday. Hah. Potentially this was an activity more suited to Fat Tuesday, but scheduling is what it is. Clearly neither of us are forgoing cupcakes for Lent.)

Butter Lane has an annex of sorts where its classes are held. There is nothing that warms a baker’s heart more than walking in and seeing…THIS. 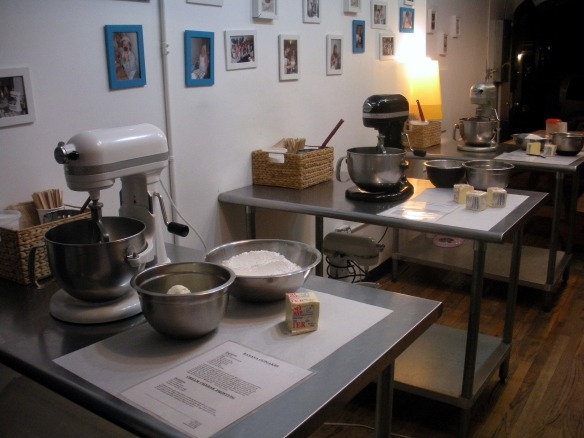 And also a little bit of thisssss. 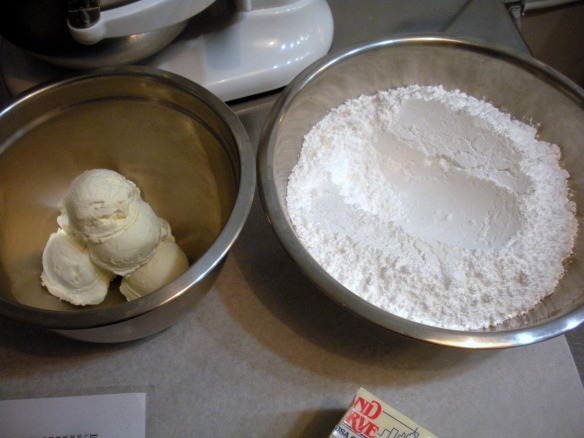 That on the left? Not ice cream, my friends. No no. That right there would be giant scoops of cream cheese. Be still, my heart.

Of course you know Middle Chip and I made a mad dash for the chocolate frosting station as soon as we were turned loose on the mixers. What do you take us for? 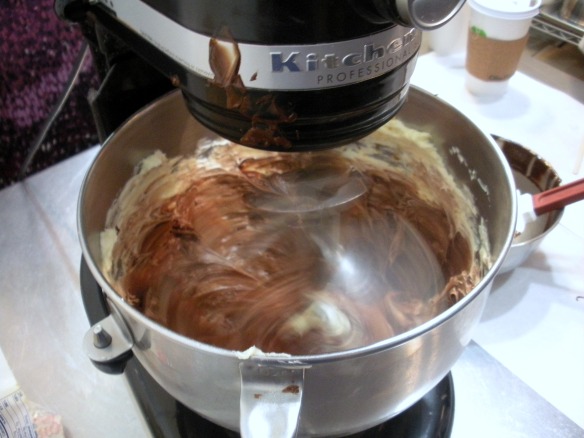 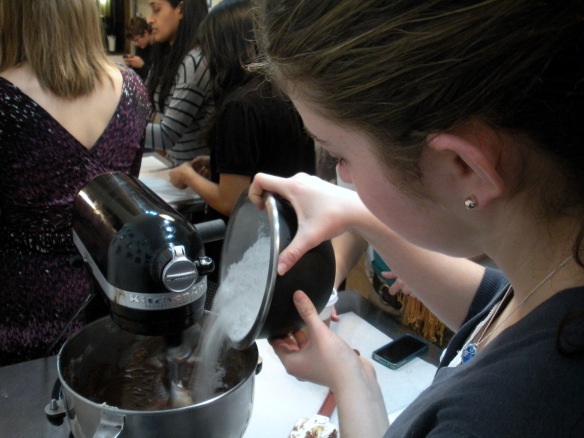 While I may be biased, I don’t think I’d be incorrect in saying that Team Chocolate had the most fun. The two girls who paired up with us were equally enthusiastic about adding the “splash” (read: heavy-handed pour) of vanilla extract, and especially about gratuitous use of Butter Lane’s handy “tasting sticks”–I mean, you can’t very well frost your cupcakes without doing plenty of quality control, right?? Exactly.

It turned out that mixing frosting was the easy part. Getting the patented “Butter Lane swirl” on your cooled cupcake was not a simple task, my friends. Our cupcake counselor, Rachel, encouraged us to start out with the “controlled dollop” and pat the frosting down from there…we attempted to imitate her expertise with varying degrees of success. 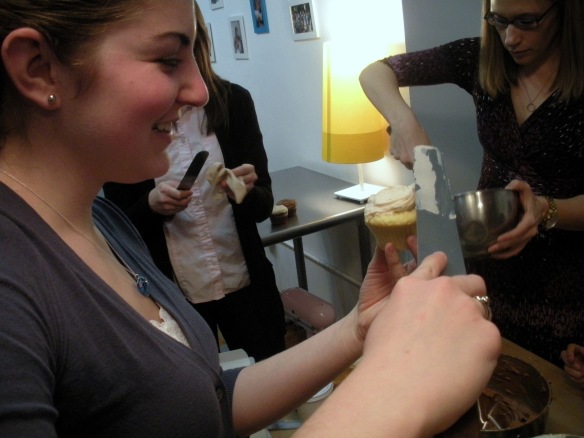 “Is this dollop controlled enough?!?” 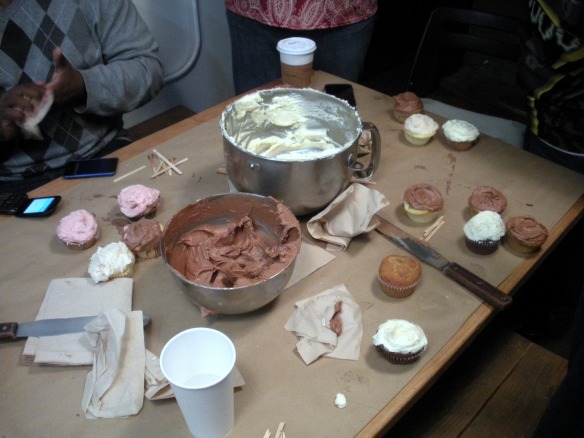 Take the above cupcake detritus as you will.*

In the end, though we may have been covered in varying degrees of frosting (and may have ingested more than our fair share of it), we each wound up with a lovely box of four treats to take home. 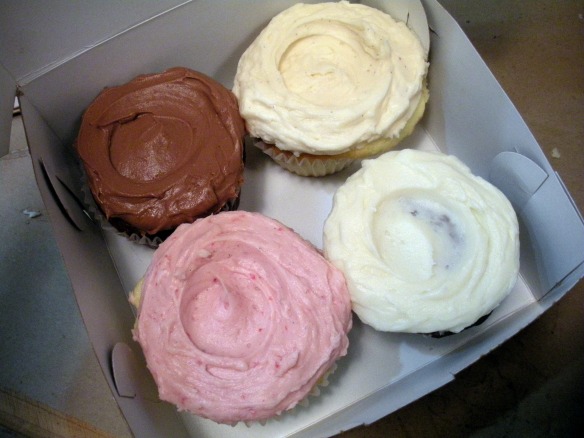 My cupcake babies! I may not have won the prize for best icing job, but I was pretty proud of those swirls. 🙂 I think the vanilla raspberry one looks best…it also tasted the best. That particular cupcake did not even make it on the subway back to my apartment. True story. 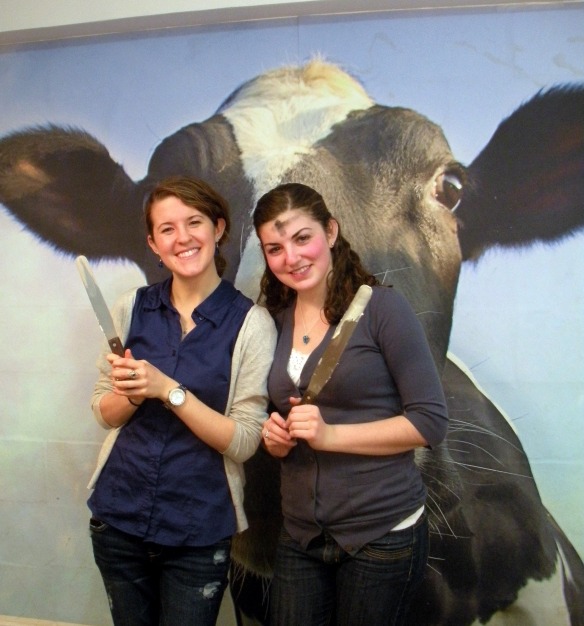 Love my sister! I think it’s safe to say that this was the best belated Christmas outing ever. If you’re looking for a fun activity to do with friends who have the same inordinate love of butter and sugar as you…do yourself a favor and take a cupcake class. As part of the hour-long class, you learn to make three frostings (vanilla, chocolate, and cream cheese) and three additional flavors of those frostings (we mixed to make raspberry vanilla, chocolate peanut butter, and cinnamon cream cheese). Plus you get access to Butter Lane’s recipes! I take no responsibility for the number of times you taste test your frostings for quality control. 😉

*No cupcakes were harmed in the writing of this blog post.

12 thoughts on “Sister Love: A Cupcake Class at Butter Lane”